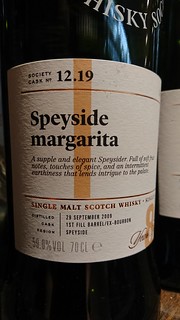 Water brings out tight, thin whorling that settles into brief mottling. The nose gains hints of oak furniture and cinnamon. The body gains a little cinnamon. The finish gains cinnamon that builds as it dries on the tongue.

An intriguing dram which just had too much cinnamon for me after watering. But it was superb before water, so I'll just not add water next time!

One for autumnal afternoons.