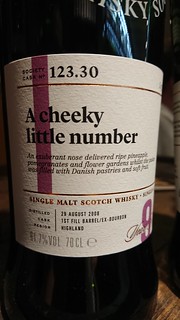 Water brings out thin, rapidly expanding whorling that settles into lingering mottling. The nose gains more pineapple and some peach, and loses the sultanas. The body gains cinnamon and loses the peaches. The finish gains peach and more intense pineapple, and a little more cinnamon.

Cheeky indeed, this dram has a lovely set of fruits and balances it with the cinnamon nicely.