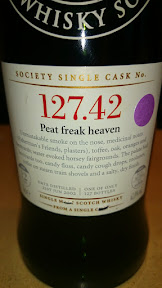 Dried peat, burning peat, and peat smoke at first on the nose, followed by germoline and burnt peanut brittle. The mouth-feel is a little rough due to the alcohol levels, but quite clean. The body has creosote, vinyl, toffee and a hint of neoprene. The finish is long, slightly sweet smoke.

Water brings out very tight, short-lived whorling. The nose now has less peat, more smoke - and more toffee. The body has much more vanilla and toffee and a little liquorice. The finish is still long-lasting smoke, but is sweeter with more toffee and even a hint of florality.

A dram for the coldest of winter's days.

Note: I tried this from a very new bottle, later drams seemed softer and more rounded. However, I also tried this after a few lighter whiskies, so that might also have caused a certain bias. The peat freak will not be disappointed by this dram, but it may be a little lighter than my notes suggest.