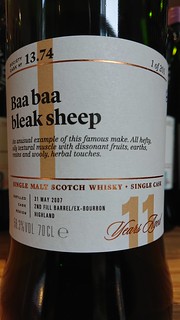 Water brings out thick, rapidly expanding whorling that settles into lingering mottling. The nose gains caramel and toffee but loses the dusty earth. The body gains caramel, toffee and hen a big hit of cinnamon. The finish gains a lot more cinnamon.

Water killed this dram for me. A pity, as I enjoyed it before the cinnamon took over...

One for autumn afternoons.