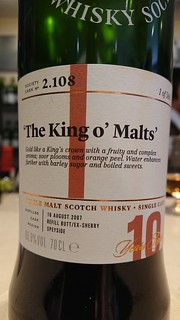 Water brings out compact whorling that lingers briefly without mottling. The nose gains barley sugar water and loses the raisins and sultanas. The body gains boiled sweets - blackcurrant flavoured ones especially - and the cinnamon from the unwatered palette diminishes a little. There's also now some hints of cinder toffee. The finish has less orange peel and more boiled sweets, with cinnamon but not nutmeg.

A belter of a dram, for those fireside evenings.