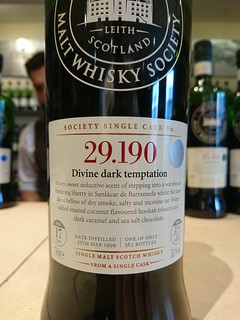 The nose has an immediate hit of sherry, followed by notes of sultanas, hessian and butterscotch. The mouthfeel is thick, with a little coating. The body is a little quiet at first, but then expands into cinder toffee, butterscotch, sultanas, sea breezes, and hints of cherries and a touch of distant smoke. The finish is distant smoke and sultanas.

Water brings out thick whorling that expands and settles into brief whorling. The nose has gained tobacco and loses the hessian. The body is no longer quiet - more of the sultanas, cinder toffee, a little less of the butterscotch. The finish gains salted caramel, but is still distant smoke and sultanas.

A wonderful dram, one for firesides and friends. An utter joy.