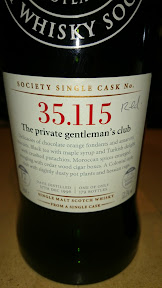 The nose has biscotti, chocolate oranges and a hint of black tea. The mouthfeel is full and smooth. The body has spices (cinnamon, moraccan spices) and and hints of rosewater and cedar wood with a soft touch of tobacco. The finish is long and sweet - black tea and cinnamon.

Water brings thick, lasting whorls. The nose now has no biscotti, but plenty of black tea and a little cinnamon and toffee joining the chocolate oranges. The body has less spice and more hessian notes, with the rosewater absent. The finish is short and tannic - just a hint of cinnamon with plenty of black tea.

A decent dram for an evening by the fire.