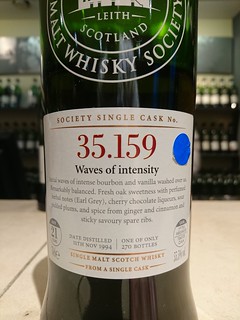 The nose has tea chests, vanilla, lavender, ginger and a hint of cinnamon. Big and complex, it rewards repeated nosing! The mouthfeel is decent but has very little cling - very smooth. The body has pears, cinnamon, vanilla, raisins, lavender pot-pourri, and then it slides towards tea and chocolate towards the finish. The finish is sweet with a little spice - vanilla, cinnamon and lavender.

Water - added reluctantly and only in the name of discovery - brings out thick whorling that expands and dissipates quickly. The nose now has less ginger and cinnamon. The body has more of the cinnamon and the chocolate becomes darker, and the raisins have gone. The finish is a little more cinnamon.

A very good dram for celebrating with friends.