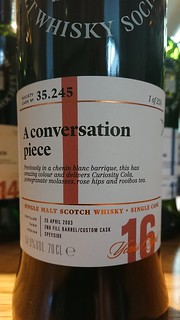 A nice light dram that has a little spice after water. Not hot, but not my style.

One for spring evenings.