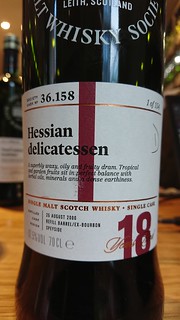 The nose has wax jackets, lychee, pears, hard chalk and hints of pineapple. The mouthfeel is thin with no cling. The body has hessian cloth, pears, wax and hints of dusty earth. The finish has hessian, pear, lychee and a little cinnamon.

Water brings out thick, compact whorling that settles into brief mottling. The nose gains more lychee and loses the hard chalk. The body gains an almond nuttiness, more waxiness and pears. It also loses some of the hessian. The finish gains pear and loses the cinnamon.

A curious dram - elements older than its years, and elements far younger. The dram slowly changes over time, becoming much more balanced and composed. As Alice Cooper once sang, “Eighteen, I just don’t know what to say...”. I think it’s worth giving this dram time, so it can figure out what it wants to say to you.

One for autumnal evenings.

Personal preference: I’d have another dram.