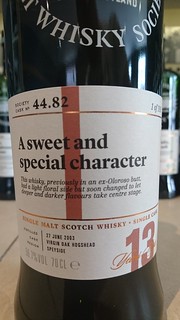 A lovely floral nose, building into sultanas and cinnamon glaze with hints of honey. The mouthfeel is thin with little cling. The body has an initial hit of cinnamon and then sultanas, toffee, and hints of dark chocolate. The finish has cinnamon spice and honey.

A superb dram for summer evenings.