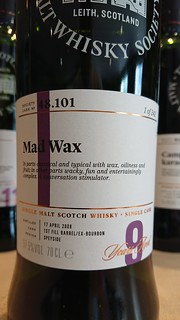 The nose has red apples and plums, cinnamon and a hint of candlewax. The mouthfeel is decent, with a little cling. The body has plums and cinnamon with some hints of barbour jackets towards the finish. The finish has plums, wax and increasing cinnamon.

Water brings out thin, rapidly expanding whorling that lingers as mottling for quite a while. The nose gains even more plum, and some hints of satsuma. The body gains more plum and loses the cinnamon and waxiness - it's more like a slightly alcoholic fruit drink now. Alcopop whisky! The finish is plum and red apple with hints of cinnamon.

This is a delightful dram - a real touchline whisky for the start or end of the Rugby season.

Personal preference: I'd like more than one bottle (and a few Rugby games to watch it with).