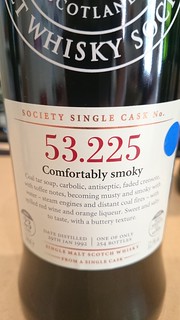 The nose is old and musty - carbolic, coal smoke, germoline, creosote, old cigar boxes, with vanilla and a hint of kiwi fruit providing sweetness. The mouthfeel is smooth, with a little cling. The body has roast pork, hard pears, plenty of coal smoke and some brine. The finish is smoke and vanilla - but mostly smoke.

Water brings out thick whorling and then quickly vanishing mottling. The nose now has more vanilla and a creaminess, but the smoke isn't diminished. The body also has more vanilla, with a little less smoke. The finish regains the smoke, and also has creosote.

A great Islay malt, for a cold Autumnal day.