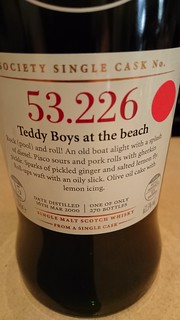 The nose has brine, crisp bonfire smoke (a very dry November!), and a hint of pork sausages. The mouthfeel is thin, with little cling and quite a kick! The body has more pork sausages with a little herbal influence, (tarragon, oregano?) then vanilla and brine before a hint of ginger. The finish is ginger and vanilla with a little brine.

Water brings out tight thin whorling that barely spreads, but settles nicely. The nose has more vanilla and herbal notes, less of the pork. There's still plenty of crisp smoke though. The body has more herbal notes and is less meaty, with plenty of brine and a little tar and ash. The finish has brine, oregano, smoke and a hint of pepper.

A superb end to a warm day.