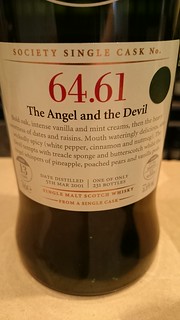 The nose has some big vanilla notes, then coconut oil, then soft pears and raisins. The mouthfeel is sharp and thin, with little cling. The body has more vanilla and some old tea chests, then pears and lychee, then a hit of white pepper at the end. The finish is white pepper, hard pears and vanilla.

Water brings out rapidly expanding thick whorling that settles into short lived mottling. The nose now has more of the soft pears and less of the raisins - pineapple and sultanas. The body is softer - the tea chests have gone, and there's butterscotch and pineapple before white pepper descends to cleanse the palate. The finish is a little sweeter than before, but has a lot more white pepper.

A pleasant dram, but I can't recommend water with it. I'd have it in a hip flask for a countryside walk.