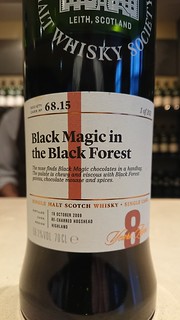 The nose has toffee, caramel and tobacco notes. The mouthfeel is thin with no cling. The body has raspberries, barley sugar water - a very unexpected top note! - and then moves towards sultanas and apricots. There's cinnamon and other wood spices in the background, along with faint toffee. The finish has cinnamon and toffee with sultanas.

Water brings out thick, compact whorling that dissipates quickly without mottling. The nose gains sultanas, violets and hints of rough leather. The body gains more sultana and a hint of violet, and then ginger and more cinnamon. Almost a little too spicy for me, but it holds itself well. The finish is heavier on cinnamon, but gains a little leather too.

A remarkable dram that would be great in autumn, as the nights start to draw in.