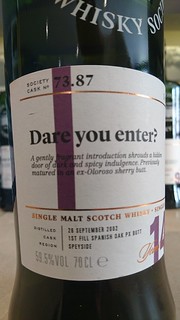 The nose has cinnamon, jasmine, sultanas and hints of apricot. The mouthfeel is thin with little cling. The body has more of the cinnamon and then ginger, honey and more sultanas. The finish is cinnamon glaze and ginger.

Water brings out thin, short lived whorling that dissipates quickly. The nose now gains more apricot and some golden syrup, and loses the sultanas. The body has more cinnamon and ginger. The finish is more intense.

A trojan horse of spicey notes - maybe over ice cream?