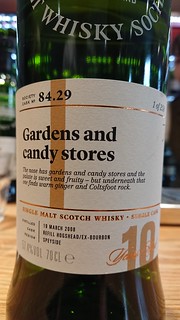 Water brings out tight, thin whorling that mottles for a while. The nose gains brioche, apricot and ginger snaps. The body gains apricot, ginger and a little menthol. The finish gains menthol and retains the cinnamon.

Despite having spicy flavours, this was never too hot.

One for autumnal walks in a hipflask.