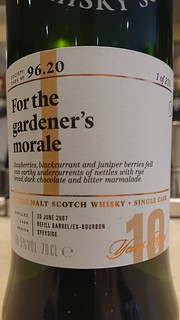 The nose has toffee, dried fruits, rye bread and a hint of florality. The mouthfeel is thin with no cling. The body has cinnamon, cinnamon and more cinnamon - dominating. Towards the finish there's some dried fruits and toffee trying to be heard. The finish is cinnamon.

Water brings out thin, rapidly expanding wholring that settles quickly into lingering mottling. The nose gains more of the dried fruits, and loses the rye bread. The body gains beeswax and toffee, and loses some of the cinnamon. The finish is beeswax, sultanas and cinnamon.

This dram needed the water for me - one for spring walks and hipflasks.