A vatted grain (we could call it that back then!), no age statement, 45% abv 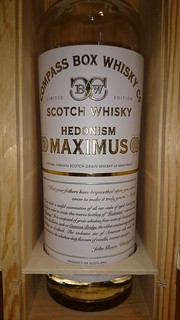 The nose is pine furniture, PVA glue, a little vanilla, and hints of fruit - kiwi fruit, apricot. The mouthfeel is a little sharp, then expands nicely into a lush and pleasant coating. It finds every nook and cranny! The body is fleeting, but pleasing - vanilla, red apples, pears, then more PVA glue towards the back of the mouth. The finish is pine sap and wood shavings.

The real joy of this dram - the artistry of it - becomes evident on repeat tastings. As each new sip is taken, the flavours begin to layer upon each other. Having one sip of this dram is like trying to appreciate St Pancras Station whilst belting past it on a motorbike - some things just take time. And this dram rewards time immensely. Coconut begins to appear. The cinnamon, especially towards the back of the mouth. And nutmeg. And hints of powdered dark chocolate. And the balance of these flavours - the elegant balance, the way that no new flavour ever takes away from what's already there... It's a bloody marvel.

I don't want to add water to this dram. I've spent fifteen minutes with it already, sipping gently. I've topped it up once, which I think is against the Whisky Tasting Rules, and will probably see me up in front of the union rep (again). But I'll do so, just for the record.

Water brings tight, short-lived whorling. The nose now has deeper notes - wood shavings, a hint of liquorice, even a little friction-burnt wood. (Ever get smoke from wood going though a circular saw? Like that. Exactly like that.) The body still has plenty of PVA glue, but also brings kiwi fruit and hints of oranges and watermelons. The body is definitely juicier now I've added water. The finish is now very fleeting - cinnamon and hints of liquorice.

If I'm honest, I'd have to say that it doesn't need water, but it wasn't ruined by it. I can't say that it was better or worse for it - just differently brilliant.

I think, in years to come, Hedonism Maximus will be rightly regarded as one of the greater drams that the whisky industry has ever produced. Not that Compass Box has produced - that the whole industry, with all its energy and enthusiasm, has produced. It is an astonishingly brilliant dram.