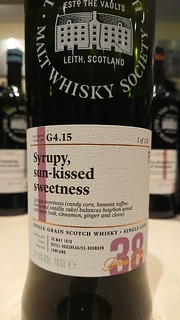 The nose has banana, toffee and hints of dandelion and buttercup - a summer meadow? The mouthfeel is thin with no cling. The body has banana chews, vanilla ice-cream, cinnamon, cloves and brown sugar. The finish is vanilla ice-cream with a sprinkle of cinnamon dusting.

Water brings out thin, lazy whorling that spreads slowly and lingers for some time, gradually drifting into mottling. The nose now gains freshly sawn oak, cinnamon and a hint of apricot. The banana and toffee remains, but the floral notes have gone. The body gains more toffee - toffee pennies - and some caramel, and there's less vanilla ice-cream There's also pineapple juice and then cinnamon towards the finish. The finish gains more cinnamon and some of that pineapple juice, and the ice-cream becomes a caramel swirl flavour.

Cameronbridge is often characterised as a blender's whisky, as it's one of the lightest and sweetest drams around. This one isn't a joy because it's atypical - it's still very light and sweet. Instead this dram makes a superb case that light and sweet isn't bad, and perhaps some under-rate the distillery.

A very nice light dram - distinctly one for summer picnics, to have with dessert.