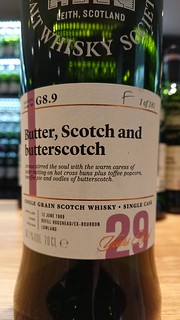 Water brings out thin, spindly whorling that settles but doesn’t mottle, it just fades away. The nose gains blackcurrant and maple syrup, but loses nothing. The body gains blackcurrant, hints of rosewater and the lavender is quieter. The finish is unchanged.

Simply stunning. A plethora of complementary flavours, all working brilliantly together. If anyone wants to slag off grain whisky, then they should at least buy me a dram of this muck so I can rid the world of it for them...

One for summer afternoons in the garden.