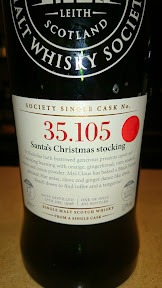 The nose is full of gingerbread, sultanas and hints of oranges. The body has canvas bags, ginger, cloves and cinnamon. The mouth-feel is thin but succulent. The finish is toffee and cinnamon.

After water (which whorls thinly, but lingers) the nose is much sweeter - the oranges become tangerines, the sultanas have gone, the gingerbread is still present but lighter. The body has more ginger, less cloves, more cinnamon and a nice note of oranges. The finish is less cinnamon and more toffee.

A decent dram to replace an afternoon tea.