Pittyvaich is a very curious distillery. Built in 1975 and closed in 1993, it ran for less than 20 years and didn't get much of a reputation. Almost all its produce went for blending, with a little going to the a Flora & Fauna expression. I've had the occasional independent bottling that wasn't to my taste, but on the whole I've generally been quite impressed.

I must admit to a little bias in favour of Pittyvaich - it's one of the first "off the beaten track" distilleries I ever tasted. Having tried everything that the local off-licenses offered, I eventually found myself in the Milroys bar (so this was some time ago!). I was asked what I'd drank and what I'd enjoyed, and promptly offered a Mortlach and Pittyvaich (both Flora & Fauna). I therefore have fond memories of both...

This is the third SMWS Pittyvaich that I've been luck enough to try. The others were 90.1 and 90.10 - the latter being the last Pittyvaich we ever saw from the SMWS (in the UK, at least). This makes for a curious pattern - almost as if I'm attempting some kind of half-arsed binary search through the Pittyvaich SMWS bottlings. One can but hope! 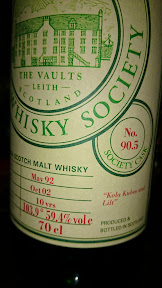 The nose is sweet and light - citrus, pear, green apple skin. Slightly aggressive, which is probably the alcohol. The body fizzes - lemon, lime, pear, kola kubes and liquorice towards the back of the mouth. The finish is sharp and full of vanilla and pears.
Water creates tight but expanding whorls, which leave fine mottling in the bottom of the glass in a most satisfying manner. The nose is more citrus and less pear and apple. The body has more vanilla - custard, but no spicy notes. The finish is where the cinnamon spice appears, alongside pears.

A superb example of an underrated distillery.