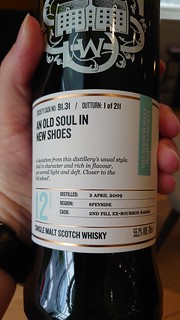 And we’re back with a decent list. 27 drams, which myself and Matt managed to taste alongside each other - it was great to catch up!

This list doesn’t have any major holes - you could criticise the lack of grain or international whiskies, but most flavour profiles are represented and there’s plenty of sherry and peat here. And most importantly, the quality is high. (And it’s rare to find a list on which you can do a comparative tasting of two Bunnahabhains AND two Caol Ilas!)

My favourites were the quite delightful Clynelish which is waxy, fruity and light - just my style. I’d like more than one bottle of that!

There’s a lot I liked on this list. The Highland Park balances light sweetness and heavy coal smoke notes with finesse. The Dufftown is a superb, competent dram that packs in an odd combination of flavours and yet makes it work. The Auchentoshan is sweet, fruity and slightly spicy without being over the top. The Bowmore has liniment, fennel and lemon - which will appeal to many. And the heavily peated Caol Ila (Port Askaig Meets Sanlúcar) is a solid peated dram that also brings pineapple and lemon.

That’s a lot of whisky to find myself recommending!

I’d like to single out two drams for brief discussion. The Macallan tried to juggle a lot of flavours but sadly fails in its endeavour. The Dufftown accomplishes exactly the trick that the Macallan fails with, being packed with flavours that complement each other in a surprising manner. Yet we all know that the Macallan will sell well regardless, because some people have a palate driven by brand loyalty rather than curiosity. This is a shame - we’re heading into July and August, which will provide exactly the hot summer days on which the Dufftown will shine. It’s quite literally the right whisky at the right time. It’s not the best thing you’ll ever taste, but it’s far from the worst and it’s not exactly expensive. So I ask you to give it some consideration. Our curiosity should be encouraged and rewarded with drams like this.

Matt’s tasting notes on the other half of the list are available at The Dramble.