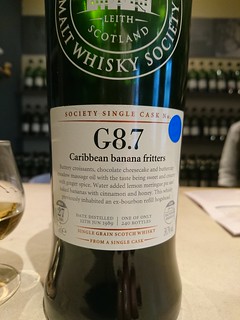 At the end of October, we have a sudden surprise outturn. On the one hand it hopefully helps reduce the sheer volume of drams we have to deal with in November, on the other hand it really did bugger up my Friday!

Fifteen drams, with some interesting surprises in terms of wood - a sauternes finished grain, two virgin oak casks and a sherry cask. Whilst we have three whiskies with peat, there's nothing massively peated here. We also have two Longmorns going head to head in one list, which is interesting.

My favourites were the Cambus, the Balmenach, the younger Longmorn, the Glenlossie, the Bowmore and the Bunnahabhain.

The rest of the outturn isn't bad, but there just wasn't anything I want to highlight. Don't mistake that for meaning this a bad outturn, though - it really isn't!