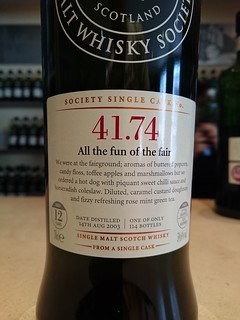 The July 2016 Outturn is titled "World Flavour", on the grounds that it has flavour and was released in the world.

(Presumably, now they're no longer owned by LVMH, releasing whisky by firing it off-world on rockets is no longer financially viable.)

The name may be contrived, but this is the best list of the year. Whilst there are no 5/5 drams, the number of high-scorers is way up there, making this a list of must-have whiskies. The only real reason for complaint might be the lack of sherried whiskies, but I think that this selection of drams more than makes up for that. The society should aim for excellent flavour, not a balance of cask types...

I can't quite pick one favourite - but if forced, I think I'd go for the Dailuiane. It's got that young, vibrant, sweet joyfulness that I really like. The elegant and poised sweetness of the North British was a pleasure to explore, and the smoke and herbal notes of the Ledaig rounds out a winning trio for me.

But that's not to say that the wonderful Mannochmore and delightful Glen Grant can't find a place in your preferences, not to mention the equally enticing Benrinnes.

The Highland Park was placed oddly into the Oily & Coastal category, when it's more olive oil than anything else - but it was still great! And into the peated whiskies, there are two lovely light options in the form of the Caol Ila and the Bowmore, then a nice big barbecue-themed Laphroaig.

Every single one of the whiskies linked to above scored 4 or higher. If that doesn't convince you that this list is a belter, I don't know what can!