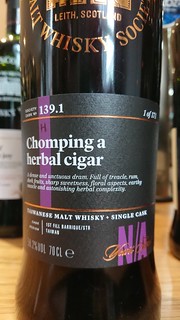 There’s a new distillery at the SMWS, and it’s Kavalan.

Rumours of this have been circulating for months now, so it’s not a surprise to regulars at the rooms. As usual, there’s a ballot for the .1 bottling, and there will be a couple of other bottles available for those who don’t win in the ballot.

For those who don’t know, Kavalan has a superb reputation in the whisky industry, winning a lot of awards. They were the first distillery to make whisky in Taiwan, and took it very seriously - taking meticulous care to ensure that what they made was excellent.

There is one thing that we do need to address though - all the Kavalans are No Age Statement (NAS).

NAS is a controversial thing for some people. Personally, whilst I like to see as many details as possible about a whisky, I can’t always get what I want. Life’s like that. What’s in the bottle is more important than what’s on the label, so NAS is a pretty minor thing for me. But someone, somewhere, is going to decide to complain about this. If there’s one thing that seems constant in SMWS membership, it’s complaints. When they first bottled Irish whiskey, they got complaints. When they first bottled Japanese whisky, they got complaints. And the same with grain, and rum, and so on.

I did ask about the releases all being NAS, and the answer I got was that it’s how Kavalan operate. They don’t disclose the age - they’re all about flavour profiles. This is consistent with their own range of whiskies, which are distinguished by their cask finishes or other details - but not by age. The SMWS isn’t withholding an age statement, because they didn’t get one when they bought the casks. As this is how Kavalan do business, we have a simple choice - NAS Kavalans, or No Kavalans.

I think the Society would be foolish to pick No Kavalans in these circumstances.

What’s in the bottles is good. That’s what matters. We have precious little time on this earth - if you want to spend some of it complaining about what is or isn’t on a label, that’s your choice. If you need me, I’ll be enjoying the whiskies, not obsessing over labels.