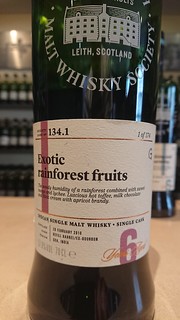 A new distillery is a big event at the Scotch Malt Whisky Society. There's usually a mad scramble to get hold of bottles of the first release (.1), and much guessing at what the distillery is.

This time is a little different. The release isn't part of a normal outturn, but was done mid-October by email and website. It seems an open secret that the distillery is Paul John, making this the SMWS's first Indian whisky. Bottles of the .1 release are available only by a ballot, which you enter by email. They've also put out a 134.2 release at the same time, and for the same price - so if you just want to try a bottling from the distillery and aren't fussed about nabbing the first one, you have a chance to do so.

I can't see what more the SMWS could have done to try and make this fair - I like this way of working, and I hope it works well for them.

But what about the whiskies?

Well, they're both good. That's no surprise - Paul John is an excellent distillery. Personally I think I preferred the 134.2, but it's a close run thing. Both score a very solid 4, and I was nudging up against a 4.5 score for each - but they lacked that certain something that's hard to define. They were very spirituous, rewarding the patient drinker who's willing to let the whisky sit. And let's be clear - a 4 is not a bad score.

Get to the rooms and try these bottles before they're gone!