The nose has soft peat, green olives, soft leather and hints of lemon. The mouthfeel is thin with no cling. The body has plenty of peat, but not sharp. There’s also lemon and lime, then some hints of green apple. The finish has plenty more pear and some lemon. 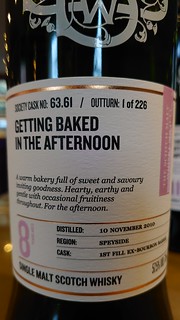 It seems like an age since the last preview tasting. Mostly because it is.

Fortunately, August has a pretty good list. There was nothing that I wanted more than one bottle of, but a lot of bottle candidates. The scores never dipped below 3.5, either.

It’s no surprise that I really liked the Cambus, but it has a little spice that makes me less enthusiastic about it when compared to last month’s effort. Also worth investigation is the An Cnoc, which has a a delightful nose.

The Glentauchers is yet another young stunner, and the Linkwood is a fruit bomb.

What strikes me is that this list is above average and that it’s also quite nicely in keeping with the season - lots of lighter, sweeter drams. There’s nothing wrong with a taste of another season, but it can be jarring to be sipping sunshine on a winter’s solstice. It’s nice to have some seasonal suitability...

As it was Matt’s birthday he got two peaty drams, and a few other things that are to his liking. The peated dram I previewed - the Croftengea - has been sent back for relabelling so will be late to arrive. A real shame, as it's my pick of the list - a superb young peaty beastie...

You can read Matt’s reviews for the rest of the list over at The Dramble.