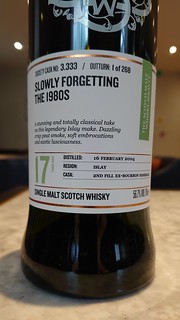 This list is another large one, with plenty of variety - and spice!

Unfortunately I had to do these previews alone, as Matt was on a trip to Scotland. This left me with the temptation of simply picking all of the whiskies I thought I’d like - but I went for two of the three Spicy & Dry drams, at the cost of skipping a lot of the Spicy & Sweet. And I feel that was a good choice. The drams I picked were interesting, and what is the SMWS if not a home for interesting whiskies?

My favourite of the bunch was the Bowmore, which not only had a pleasing number (all the threes!) but balanced floral, fruity and peated notes with grace and poise. I’d like more than one bottle, but it’s sadly limited to one per member.

We can cleanse the palate with the Auchentoshan, which had plenty of sweet fruit notes and some clean oak, making it a superb summer dram. Why was this not released two months ago? Such are the mysteries of the SMWS...

Lurching towards the extremes of sherry, we get to the Dailuaine, which lived its life in two sherry casks before being bottled. You’d think that would be overkill, but they married well and produce something that’s lighter than I expected - oranges, milk chocolates and ginger make for a seductively sweet combination.

My last two picks are both oddballs.

The Linkwood was placed in a cask that previously held peated malt. Personally I usually find this provides a whisky of two distinct halves, with “cask peating” often arriving late in the body and boorishly dominating the proceedings. But this dram has managed to find a rare balance, and the odd combination of strawberry notes and bonfire smoke was quite enchanting.

Lastly, the Inchmoan. It’s finished in a Jamaican rum cask - could the name be a clue as to which distillery the cask was from? And this is not the usual rum finish. Again, decent integration has occurred here, with stewed fruits and barley sugars dancing around the rum notes.

There have always been those who complain about finishing whiskies, often trotting out the dumbest statement I’ve heard outside of politics: “They’re just saving a bad whisky” - as though making a whisky more drinkable is a bad thing! But I think that the three here show it’s worth doing, because when you get the balance right, it’s great.

Kudos to the team handing the SMWS stock, as they’re really hitting their stride with these unusual casks. And for those who disagree - carry on disagreeing, as it means more great whisky for the rest of us!