Being a geek is an odd thing. Geeks aren't just about computers, science and engineering. We often find interest in the oddest areas.

Maps are a wonderful invention. A handy way of representing the world around us, we take them for granted every day. Yet there can be interesting decisions in making the map - like what to include, how to represent it, and so forth. 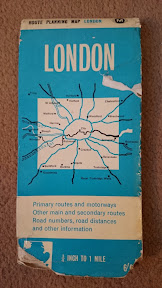 Some time ago, I was visiting friends and they gave me a map of London as a gift. This was a kind, thoughtful gift, which was much appreciated as it combined history and maps - two of my favourite things!

And when I got back to my hotel room that evening, and spread it out on my bed to examine it, I couldn't find a date on it at all. Which is why a kind, thoughtful gift kept me awake until two in the morning...

People often forget that maps aren't just a representation of something, but they're also - by design - a snapshot of that something at a moment in time. So although the map has no date, I should be able to find one by comparing the map with historical changes. And thanks to the internet, these kinds of comparisons can now be done quite easily...

(All the pictures link through to larger versions in a gallery of pictures, including some I didn't use as the page was getting crowded. They were taken with a camera phone - so they're not hugely sharp at times. Apologies for that!) 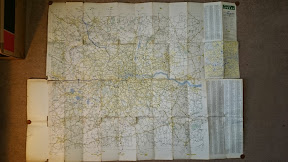 In map terms, it's not an unusual one - it's a road map of Greater London, with a larger scale inset for central London. The map has some tourist points of interest, and otherwise sticks to roads. But the lack of a printing date meant that I wanted to know which London it represented - which year it was trying to show me.

The first thing I do is check the price. It's in old (pre-decimal) money, so we can reasonably assume that our upper date for production of the map is 1971.

(For non-British readers - in 1971 we decimalised our currency. Prior to that we used pounds, shillings and pence - 240 pence to the pound, 12 pence to the shilling, 20 shillings in a pound. We liked it that way, but because everyone else likes to have 100 of their minor unit of currency in their major unit of currency, we changed it so you don't have to do hard sums. We're nice like that.) 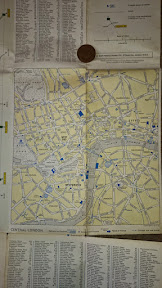 A number of clues exist to the date of the map, but many of them are post-1971. Here are a few of the changes that didn't help... 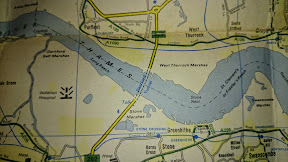 In the east of the map, I finally find something useful. There's no Dartford Bridge, but there is a tunnel. I didn't expect a bridge, as that's a very recent addition to the landscape, but the tunnel didn't open until 1963 so now we have a lower date limit for the map. 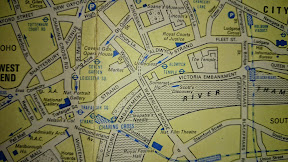 And we can raise that limit moments later. Trams last ran in central London in 1952, so it seems futile to look for them - but there is the Strand Underpass, which reused an old tram underpass - and was opened on 21st January 1964. We've now raised our lower limit by a year.

I want to return to looking for closed railway and tube stations, because that seems like an excellent way to narrow the dates down. However, I recall that many of the closed stations I'm familiar with - Muswell Hill and Alexandra Palace, for example - closed in the 1950's. I persevere with this anyway.

Holborn is known as "Holborn (Kingsway)", and the Barbican tube station is listed as Aldersgate - but the web and wikipedia don't give me a decent date for when those names changed, simply listing the time as "the sixties". 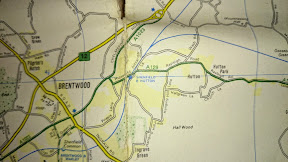 But out in Essex, I note that Shenfield is listed as Shenfield & Hutton, the name being changed in 1969 - two years before our current higher date limit of 1971. 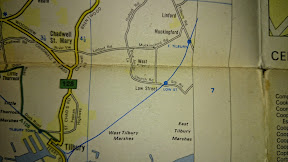 I begin looking at the map for railway stations outside London, and checking their status. After thirty minutes or so, I find Low Street station - near Tilbury, and closed in 1967.

I don't see any other unusual railway stations that seem out of place compared to a modern map, so I move to my next technique...

Scouring landmarks, the first oddity I see is that New Scotland Yard is on Embankment, not on Broadway - looking it up, they moved in 1967. This suggests that the 1967 date can be moved back towards 1966... 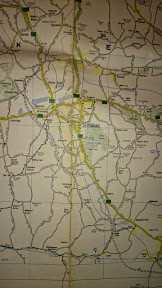 But the real result was when I checked the motorways. The Sevenoaks Bypass on the A21 and the M1 both have "Under Construction" noted by them, and Wikipedia is convinced both opened in 1966 - which means a 1965 upper date. I feel fairly confident, given the lack of 1964 features, in putting the lower date at 1965 too.

So there we have it. We've now learned two very useful things. Firstly, the map represents a snapshot of London in 1965. Secondly, if you want to keep a geek quiet you should remove the dates from an old map and give it to them. It'll buy you a few hours of peace and quiet... 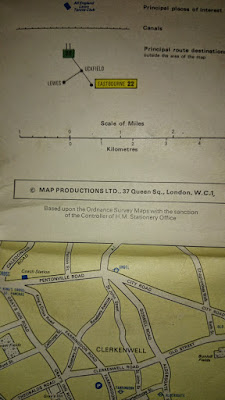