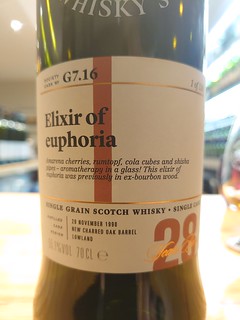 Water brings out thick, rapidly expanding whorling that dissipates quickly. The nose gains honey and golden syrup, with hints of cherry. The polished wood is more rounded, and the rum and apricot are diminished. The body gains cola cubes and naan bread, and loses the rum notes. The finish gains a little cinnamon spice, but not too much.

A wonderful dram - the finish has lifted the spirit and added those rounded polished wood notes, which really counterpoint the fruit and bread.

It’s a new year, and the holidays mean a late delivery. My colleague Matt can’t make it at all, so I have to hurry through the list on a Thursday night. London’s also missing five bottlings, which is easier on me but less good for everyone else! If you were hoping to see the 29, 53, 7, 46 or 112 then I’m afraid you’re out of luck. Sorry.

I did manage to taste the rest of the list. As is so often the case, it’s a mixed bag - overall a high standard, but my tongue was burning from spice a few times.

My favourite will probably surprise nobody - it’s the Girvan. Fruits, bread, rum, and polished wood - this is a real pleasure of a whisky. Closely on its heels is the Clynelish, which is young, fresh and sweet without ever being unbalanced or uninteresting. I’d like more than one bottle of both of these!

The Craigellachie has leather, tobacco and oranges - which I’m sure will be popular. And the Benrinnes has mango and other fruits - a superb nose, and it’s only held back by some spice after water. Both are highly recommended and I’d like a bottle of each.

This is also the first time we see the new logo and labels. I’m ambivalent about the logo. The labels, however, have both good and bad changes. It’s good that they list both woods in the event of a second maturation, but I’d still like to see the age be smaller and the distillery/cask number be bigger. And using only colour on the label to show the flavour profile is an accessibility faux pax - colour blind people now have a harder time. Would it really be so difficult to write the flavour profile somewhere? But overall it’s an improvement on the old label, if only because we’ll not see dark stripes going behind the distillery number and name on some bottlings, making it hard to read...