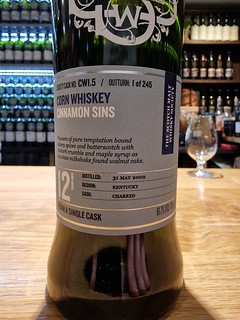 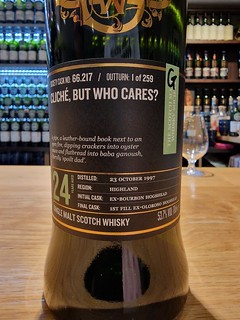 The SMWS usually has two lists in November, and this year is no exception. And just like the first list, the quality is pretty uniformly high here. Lots of 4/5 and “I’d like a bottle” on display.

These were previewed on the same day as the ones for Outturn 321 at the start of the month. In fact, I split the drams and gave Matt what I thought would be the better of the Ardmore and Glen Scotias we had, but it turns out both of us thought that these were better.

The Ardmore charms with citrus, smoke, leather and chocolate in harmony - it got the only 5/5 technical score, and deserves it. The Glen Scotia is smokey and dirty with a touch of sweetness, and follows shortly behind the Ardmore in my favours.

Then there’s the Penderyn, which is rich and sweet with leather tobacco pouches. And why not move towards sweetness with the Glentauchers which carries pink wafers and fruits alongside foam bananas and marzipan...

There’s bound to be something you’ll like, but those four are the ones I want bottles of.

(Sadly the grains didn’t arrive in Greville Street, so those I’ll just have to buy blind...)

Next month should be the Christmas Parcels, which usually has some slight eccentricities on it, so begin bracing yourselves!