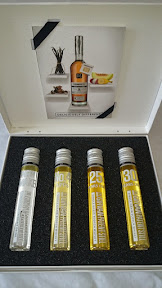 This usually comes off the still at around 94% abv, but here's it been watered down to a less mouth-numbing 42% abv.

The nose has peaches (in a sorbet?), green apples skin (Golden Delicious?) and soft vanilla, with bubblegum hints. As it sits, it gets grassier - hints of dusty summer meadows. The mouth-feel is expected to be thin at 42%, but is also clean and smooth. The body has vanilla, hints of citrus (orange concentrate), cinnamon and toffee. The finish continues with the toffee notes, and adds a little hint of sherbet fizz.

For any new make, this would be good. But we're so often told that grain whisky is industrial alcohol with no redeeming characteristics, making this new make something of a little revelation in a glass. It should be the first thing you drink, as it's not a forceful dram - but it has complexity and subtlety galore!

Compared to the new make, the wood influence is immediately obvious on the nose. There's a mustiness - old books - then toffee and ripe pears. At the very top of the nose there's also apricot and gun oil. The body brings toffee pennies, butterscotch, pears, and a slightly oily mouth-feel. At the end of the palate, just as the finish begins, there's also a subtle cinnamon note. The finish has butterscotch, apricot and peaches, and lingers pleasantly.

Vanilla initially then grapefruit on the nose - which is quite complex and subtle. There's lots going on, with white grape, green apple skin and a hint of toffee and butterscotch in the background. The body has honeycomb and butterscotch, with more of the green apples and grapefruit from the nose. There's also toffee and light citrus towards the back of the mouth. The finish has a little chocolate bitterness, cinnamon and cardamom, and a lovely smooth toffee and caramel.

Ben mentioned Crunchie bars for the body, and Twix for the finish. I think he should have eaten before coming to the tasting...

This whisky is elegant, well constructed and demonstrates remarkable subtlety.

Compared to the 25yo, the nose is spicier with a heavier fruit note (Martyn mentions blood oranges?) and more spices (cardamom, Arabic spices). There's foam bananas, and a little hint of buttered popcorn. The body has more spices too - again with the cardamom and some cinnamon - then it moves into blood oranges, then chocolate oranges and vanilla sponge cake. The finish has toffee, oranges, a little dark chocolate and a touch of fudge.

The balance and integration of this whisky is superb - it manages to deliver every note without flaw, and without any undignified fighting for attention or clashes of personality.

Girvan changed their cereal supply from maize to wheat in the early 80's, I suspect that there's at least one cask of maize in here providing those subtle spice notes...

The nose is full, big - fruitcake, especially raisins, and a slight note of seville oranges. There are also notes of cloves, cinnamon and coconut. The mouth-feel is very smooth and silky, no real burn from that higher strength compared to the previous drams. The body has buttery notes, followed by a big but restrained hit of oranges and then dark chocolate, tobacco pouches and a touch of liquorice. The finish has more oranges, liquorice, dark chocolate, and coconut.

It should be noted that as it's from 1964, it's practically from the first year of Girvan's distillation. (I think the seven days of 1963 distillation make for far too short a "first year" to count!) The rumour mill says it's from early in that year, but I've never been able to confirm that. Either way, this is a bit of liquid history...

Like the Girvan 30yo, this is a masterclass in balance, subtlety and integration.

The body has sponge cake, green apples, ripe pears, honey and a little toffee. The finish is long, sweet coconut and vanilla with a little ripe pear.

Water brings tight, thin whorling that dissipates quickly. The nose now has peaches and apricot, less candyfloss. The body is a little fruitier - pineapple, pears, apples and sultanas. The finish is intense sweetness, vanilla and cinnamon with spun sugar.

Definitely the biggest and most intense of the drams here, this is a superb dram to finish on.

After six great whiskies - well, five and a new make! - I feel I should mention the wonderful consistency of lighter fruit notes that all these Girvans had. Whether young or old, cask strength or not, sherry cask or bourbon, that light fruity sweetness was ever-present and welcome. Some distilleries can struggle to maintain that kind of consistent thread, conforming to their casks or metamorphosing as they mature. Girvan showed itself to be adaptable, but refused to change its core notes in any of these drams.

Also notable are the scores. I've rarely done a tasting where the scores were so uniformly high - the lowest being 4/5. Towards the end of the vial pack, I think we were starting to feel a bit guilty about giving yet another high score as we discussed the whisky, but we couldn't escape the fact that it was well deserved.

If you need to show someone that grain's not the cheap bulk filler that they were always told about, then a bottle of Girvan is almost certainly your best bet.