Late May was Grain Week at the SMWS. (Yes, this is very late. Sorry.)

The SMWS has always had a progressive streak - despite their name, they've also bottled Irish, Japanese and Welsh malts in the past.

Several years ago, they started bottling grain. This annoyed the traditionalists no end, but has kept me happy and my bank account empty for a while now...

So here we go - ten grains, eight of which were brand new. How could I resist? 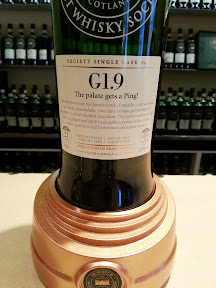 G1.9 - The Palate Gets a Ping
21 years old, distilled 14th December 1990, 62.8% abv, refill ex-bourbon hogshead
Butterscotch, eucalyptus, greenhouses and a hint of oranges on the nose. The body is fierce with alcohol burn, but provides notes of ginger, flapjacks and caramel, along with a hint of chocolate. The finish is sweet and full of vanilla.
After water, the eucalyptus becomes more clove-like, the body has more vanilla, and the finish has a little toffee.
This is a great dram, full of flavour and lingering in the mouth. A grain for any occasion...
4.5/5

G1.10 - Sweetness somersaults around the mouth
21 years old, distilled 14th December 1990, 61.1% abv, refill ex-bourbon hogshead
The nose is full of vanilla and corn, vwith maybe a little candy floss. The body is big and sweet with cinnamon and other wood spices, plenty of toasty oak influence here, along with a slight mentholic note. The finish is quick but sweet.
With water the dram becomes even softer, more cinnamon and vanilla. The body is sweeter, mintier, with more spun sugar and slight oat notes. The finish is still quick, but now has a touch of toasted bread to it.
This is the shy sister of G1.9, sweet and soft and quiet. Don’t be a fool and overlook her - she’s just as good company as her sibling.
4/5 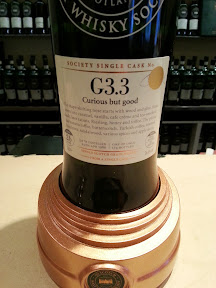 G3.3 - Curious but good
26 years old, distilled 29th April 1986, 56.0% abv, refill ex-bourbon barrel
The nose gives vanilla, furniture polish and wood glue and a hint of currants. The body isn’t as forceful as I expected - smooth, with notes of banana, butterscotch, and a return of that tease of currants. In the finish there’s vanilla, currants and glue.
After water, the currants disappear from the nose - it’s just vanilla and wood glue now, with the vanilla being more dominant. The body gives the sweetness first, then hits with an alcohol burn and honey, touches of creme brulee and juicy raisins. I don’t know what this dessert is called, but I want more! The finish is sweet - just vanilla, now joined by a little cinnamon.
A superb easy drinker, great for an afternoon picnic.
4/5

G3.5 Chocolate Cafe Latte
33 years old, distilled 28th May 1979, 49.6% abv, refill ex-bourbon hogshead
Hazelnuts, PVA glue, vanilla, hessian and caramac on the nose. The body is lighter, with mango and pear, along with a very slight hint of wood spice and cherry blossom.
After water, the nose has rosewater and pine resin. The body is full of cinnamon, fudge, hazelnut and a little lightly toasted bread. The finish is more cinnamon.
As the glass sits, this whisky turns slightly more woody - in an elegant way. I would have liked to explore that, but when it hit notes of old dusty oak on the nose I was strangely compelled to empty my glass...
A fine elegant dram which combines a lively palette with subtle balance and elegance. Suitable for any occasion? Maybe. Desirable for any occasion? Certainly!
4.5/5

G4.3 Custard Creams and Kentucky Staves
30 years old, distilled 15th February 1982, 54.5%, refill ex-bourbon hogshead
The nose is full of vanilla sweetness, with plenty of American Oak and cream soda. It's soft but with a curiously sharp and crisp edge.
The body is full of toffee and ice-lolly sticks, and the finish is like custard creams.
With water, there's a touch of fudge on the nose, and the body now has a slightly fruitier hint - peaches, perhaps? The finish remains full of vanilla, with perhaps a tiny echo of that peach.
4.5/5 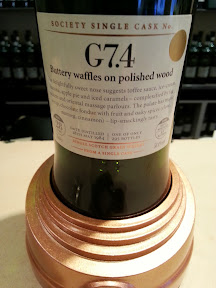 G7.4 - Buttery waffles on polished wood
28 years old, distilled 28th May 1984, 58.4% abv, refill ex-bourbon hogshead
Toffee, apple, banana and crumble on the nose. The body is light, with a smorgasbord of flavours - flowers, cardboard, cinnamon, cloves. The finish has golden mi I and cashews.
After water, nose becomes drier and has more cereal notes - bran? The palate moves towards walnut and fondant centres.
A superb expression, which will not last long in any discriminating glass...
4.5/5

G7.5 - Smoky Werther’s Original
28 years old, distilled 28th May 1984, 58.9% abv, refill ex-bourbon hogshead
A nose of dusty rooms - old wooden furniture and books. This gives way to vanilla and soft caramel. The body has vanilla, cinnamon, fudge, slight menthol, eucalyptus and toffee. The finish is vanilla and slight toffee.
After water, the nose gains eucalyptus and vanilla, and has a hint of old creaking leather. The body is sweet - more soft fudge than toffee, and more vanilla. The finish gains a little touch of the menthol.
A superb dram - one of the best grain whiskies of Grain Week.
5/5 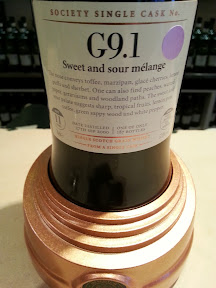 G9.1 - Sweet and sour mélange
11 years old, distilled 27th September 2000, 57.8% abv, refill ex-bourbon barrel
The nose is big, with toffee and lemon sherbet dominating over slight violet notes. The body is chimeric - thin, yet full of shifting flavours. Violets and geraniums compete with white pepper, oak, cinnamon, aged ham, tropical fruits and toasted whole grain bread. The finish is a big hit of white pepper, cinnamon and oak.
After water - which is advisable with this dram - the nose settles a little but the flavours remain - sherbet (sans lemon now), toffee, violets and white bread. The body is smoother and has less floral notes, but still full of white pepper, aged ham, hard toffees and cinnamon. The finish now has some of that ham joining the cinnamon and oak - and a nice touch of vanilla...
A somewhat forceful and savoury grain, which is pleasingly atypical for the genre. It highlights how broad grain can be, and I'd happily drink it at any time or anywhere...
4.5/5 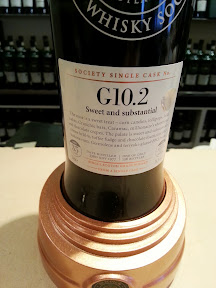 G10.2 - Sweet and substantial
35 years old, distilled 23rd November 1977, 59.7% abv, refill ex-bourbon barrel
A velvety nose - toffee, fudge, vanilla, and a hint of violet blooms. The body is initially wood shavings, then explodes into vanilla, cinnamon, toasted oak, toffee and whipped cream from a can. The finish is slightly prickly, full of vanilla and dark crystallised fruits (like cake decorations from my childhood!).
After water, the nose gains greenhouse notes (CO2, ammonia), but has lost none of the vanilla or violet. It’s also reminiscent of vanilla ice-cream. The greenhouse notes might not sound good, but it’s a great experience! The body is now a little deeper - orange mango, caramac, honey, and starch have all appeared - but they don’t take away from the previous flavours, and combine very well. The finish is longer, and has golden syrup added to it.
This is an astonishingly good whisky - dangerously drinkable, deliciously deep, definitely desirable. G7.5 was the best of grain week, but I think it just lost its crown...
Ideally, this whisky should be drunk with friends. Not just any friends - very good friends. Very good teetotal friends, who don’t mind you when you’re drunk...
5/5

G10.4 - A witch’s Christmas tipple
23 years old, distilled 31st August 1989, 57.9% abv, refill ex-bourbon hogshead
The nose has orange peel, pine, varnish and raisins. The body is oak at first, moving swiftly towards vanilla and smoky fudge. There’s also a little cinnamon and some zestiness from the orange peel of the nose in there. The finish is big but fleeting - it made me shudder! - and it’s mostly raisins and cinnamon. Very enjoyable!
After some water, the nose rounds out and loses the varnish - the vanilla and orange peel dominate, with a background of raisins. The body has almonds, slightly bitter - is someone trying to poison me? - if so, they’re doing it in a most enjoyable manner! There’s also walnut, caramelised sugar and umami in there, as well as a little hit of cinnamon. The finish is now vanilla and cinnamon, with a lingering note of walnut.
A big, slightly more flavourful whisky which shows that grain isn’t always just light and sweet.
I’d drink it on an autumnal evening, with a riot of colourful leaves lit by a setting sun. Or, failing that, any day with a Y in the name...
4/5