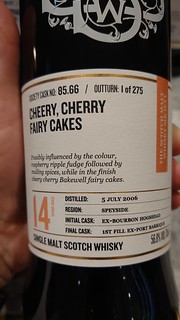 Water brings out thin whorling that dissipates without mottling. The nose gains oak and cinnamon. The body gains oak and more cherries. The finish gains softer oak and some more cinnamon.

A curious dram with a great nose, but that barrique has added a touch too much oak.

One for autumn evenings.

Technical score: 4/5
Personal preference: Just the one dram, thanks.