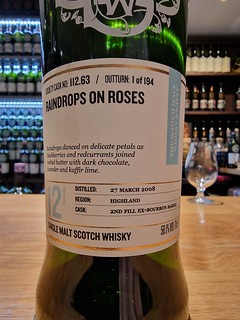 November at the SMWS looks like it'll be split into two lists... I say this because I have preview notes for 15 whiskies, but only five of them are here.

(No point in asking me what the others are. My lips are sealed!)

With just five whiskies, it feels a little odd to be picking out favourites. Luckily, the standard of all drams was fairly high.

My clear favourite was the Inchmurrin, which has floral and fruit notes that are very much my kind of thing.

But if you're not one for sweet delights, then luckily both the peated drams are superb. The Allt-a-Bhainne is the more medicinal of the two, with fruits and smoke in the meix as well. And the Caol Ila? It's a Caol Ila. And I mean that in the most complimentary manner. This is the most Caol Ila of Caol Ila's we've had for a while, and it's very hard to complain about that.

I suspect in a couple of weeks we'll be back here looking at more whiskies. Some of which are nice treats...