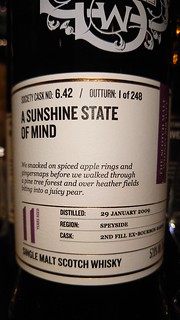 The October List has a remarkably high standard of drams. There’s no special event, no marketing blitz - just decent whisky. And a good spread of it - three peated, two oily and coastal, a grain, an Oloroso cask, a Sauternes and quite a few recharred barriques. There should be something for everyone!

Myself and Matt managed to do the tastings together, which is always a pleasure and helped give me a feel for the whole list. Plenty of approving noises from him as he contemplated his nine drams, so I’m looking forward to reading his notes.

The star of the list for me was the Balblair. It’s technical perfection is matched by its breadth and balance of flavours - fruits, wood, flowers, spices - and its delivery is superb. It’s hard to argue that there’s anything wrong with this dram, hence a high technical score and I’d like more than one bottle.

I’d also like more than one bottle of the Croftengea, which is a smokey, sooty, fruity glass of joy. Fans of this distillery know what to expect, and it doesn’t waste time delivering. It’s almost a mirror image of the Balblair in terms of age, price and flavours - but thankfully not in balance!

At the “I’d like a bottle” level we have the rather interesting Strathclyde, which delivers balsa wood, spices and a hint of rum. Almost too hot for me, water tamed it somewhat and showed that it had more depths to plumb.

And now we come to the final recommendation, which requires more than just one paragraph.

If you can, you simply must try the oddball venue only Glen Deveron. And what a pity this is venue only, because it’s not a whisky at all. It’s a bloody magic trick. It has herbs, fruits and spices and is almost too hot for me. And then you add water and it performs what can only be described as “sleight of cask”, changing completely into a much more fruity, floral dram where the spice is restrained and complimentary. It cannot be understated that this isn’t a development, it’s a revolution that overthrows the previous ruling flavours. Fearing for my sanity, I handed it over to Matt who concurred - this is two drams in one glass. It’s therefore the first dram for a while to get two distinct Personal Preferences - just the one dram when neat, but I’d like a bottle when it’s watered.

The Glen Deveron makes me wonder how it will be in a month’s time. I suspect most readers of these preview notes don’t realise that myself and Matt are almost always tasting from a very recently opened bottle, often the first or second pour from it. And we only get about ten minutes with each dram. The mechanics of tasting half a list in an evening mean that we can merely take quick sips, and rarely returning to it later to see how it develops. The best indication we have as to how a dram will behave over the long term is adding water, but that’s just an indication. What treasures and joys lie between the two extremes that this dram displayed? I’m going to enjoy finding them at Greville Street, but it’s a shame that the low outturn on this dram makes it venue only as I think more members would like to experience this chimera. I wish it had been in some kind of sample pack...

That’s it for the recommendations and ruminations. The individual reviews are linked below as always, and Matt’s reviews will be available over at The Dramble as usual.