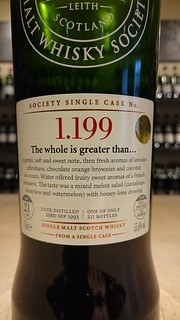 The nose has floral hints at first, like a posh soap, then oranges and coconut. After a while, lavender also appears. The mouthfeel is thin with a little cling - but very creamy. The body has orange liquers, watermelon and honey. The finish is notable by its absence.

Water brings out rapidly expanding whorling that settles into lingering mottling. The nose has lost the oranges and lavender, but has gained a little honeysuckle. The body has lost the orange liquers - I fear that the ten drops of water from a pipette may have been too many! There is still no finish.

A very light dram, which could only offend by the absences it has. It's a good easy drinker though, so don't write it off.