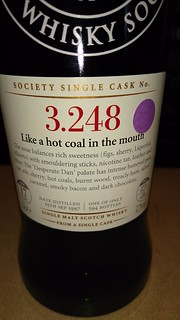 Another month, another outturn. This one came out over the same weekend as The Whisky Show, which made things tricky. In the end, I booked Friday off work and attacked ten of the drams then, mopping up the last four on Monday evening.

There's a sherry cask on this list, and it was one of my favourites. There's one first fill barrel, and everything else is refill bourbon barrels or hogsheads. That's not a complaint - I think a good refill cask gives a whisky a nice round flavour, and that's definitely what you get in this outturn. (When you're doing ten drams in a day, it would be nice to have a few other cask types to break things up - but I appreciate that this is a problem most people won't have!)

My favourites of the list were the Glenlivet (fruity and light), the Highland Park (shoreline bonfires and toffee), the Bowmore (lavender and bacon), the Bladnoch (toffee, fruit and hay) and the Glenfarclas (fruit, pastries and ginger).

Honourable mentions should go to the Mannochmore, the Aberlour and the Laphroaig (smoke!). In particular I enjoyed writing the notes for that Laphroaig, as I felt it was important to get across the exceptional and remarkable delivery that its body has.

In an unusual move, I'll go so far as to say that my absolute pick of the list is the Bowmore. It combined flavours in an interesting, unexpected way - but held it together superbly. I think I'll be coming back to it frequently, for the short while that it will remain on the bar...