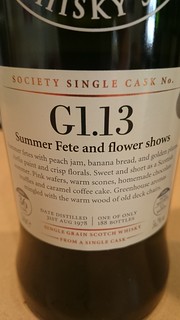 “Proper Lush” is the tagline for this outturn, and there are a couple of whiskies that definitely get there.

My favourites were the North British (surprise!), the Arran and the Strathisla.

The Benrinnes, the Glen Grant, the Highland Park, the Laphroiag and the Caol Ila also get pretty good reviews, making this feel like a very highly rated list.

Sadly, any average rating (if I could be bothered to calculate one) would be dragged down by the spicy heat of the Longmorn and the Glen Scotia - which just aren't to my palate. Others will no doubt score them more highly, but they were just beyond my tolerance for heat.

Initially, I thought that the Glentauchers would be lost to us in London as it's a Vaults exclusive. I have no problem with the SMWS doing venue exclusive malts - that's fine. But putting them on the outturn when they know that only a tiny percentage of members can get to the venue to taste it - well, it may be a great whisky but its presence on the list leaves a bad taste in the mouth. Fortunately for us, a London member happened to be dropping by the Vaults so we managed to get some...

On the other hand, the outturn now also includes the UK amounts for each bottle, which I do like. I'm not going to start putting them onto my reviews though, as I don't feel it's that essential... I write these reviews as a long-term reference for myself more than anything else, and I can't see any reason why a “future me” would want to know how many bottles the UK had, so I'm not going to include it in my reviews.