The September outturn is another decent showing from the SMWS. Will their tyranny of excellence never end? 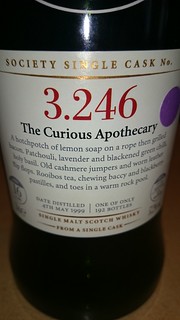 There's a whopping six first-fill bourbon casks though, which is pretty decent. And there's a white-wine cask too, which is a nice find.

My favourites were the Arran, the Longmorn, the Highland Park, the Glenfarclas and the Cragganmore. There was also a very pleasant surprise in the unusual Ardmore, which is the white wine cask alluded to earlier - and a must try for anyone visiting an SMWS bar! But the standout whisky for the list was the Bowmore - a wonderful dram, very much in the style I like from that distillery.

So there's obviously a lot to like about this list. But whisky is subjective, so it's worth noting that there are some people I was drinking with who will be dismayed at the lower scores I gave the Glen Moray and the Laphroaig - perhaps they just weren't the style I was looking for? Who knows. But disagreement is one of the fuels that fires the passions in the whisky world, so I'd be remiss if I didn't score them honestly, and then accuse anyone who disagrees with me of being a crass idiot who needs further education!

(That last part was a joke. It's a pity that we've reached the point where the internet needs jokes pointed out to it, but there we are...)

Overall, I think that September's list was a good one. When it shone, it really shone - and there seemed to be something to please almost everyone, except possibly the sherry fans. But you can't please all the people all of the time...