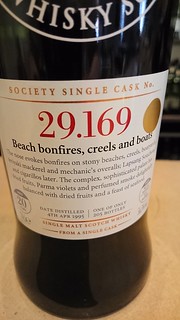 The nose has soft vanilla notes, then a hit of crisp smoke. There's an open packet of refreshers, some nectarines, and lapsang souchong tea. The mouthfeel is clean, thin and has little cling. The body has sweet vanilla and sherbert, then builds with crisp smoke. On top of the crisp smoke, it adds an explosion of more crisp smoke. Uncontent with the levels of smokey devastation it has wrought, it cries havoc and unleashes the smoke of war, before finally giving up and allowing the finish to start. The finish brings... smoke.

Water brings out thick whorling that doesn't spread or last. The nose now has - and this is a bit of a shock - smoke. Crisp dry smoke, from an autumnal bonfire. There's also a little sherbet sweetness in there, but it's mostly smoke. The body has more of the sherbert/refreshers note and some vanilla at first, then breaks out that remarkably effective smoke steamroller that it demonstrated before water. I hope it's patented that thing - it's amazing, but it shouldn't be reproduced by just anyone. The finish is, shockingly, smokey. Hints of vanilla, but mostly smoke.

This whisky may sound one-dimensionally smokey, but it's all in the delivery. A remarkable end of the evening dram, which will tempt you to end your evening early and have three victory drams for doing so.