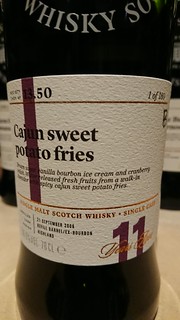 Water brings out thin whorling that expands very rapidly, then dissipates before mottling. The nose opens up - pears, orange chew sweets, vanilla ice cream and hints of bourbon biscuits. The body gains peanuts and a massive hit of cinnamon that covers much of the other flavours. The finish also gains that large cinnamon hit, and orange chew sweets.

A big change after water - and I preferred it without. That makes it one for a summer hipflask whilst rambling...

3/5 (Half a point lost in the cinnamon, but could easily be found there by those willing to explore.)