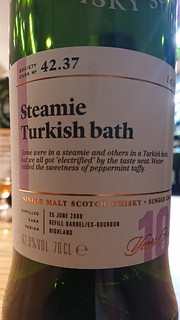 It's probably the biggest list of the year, with a whopping 40 spirits to choose from. 37 are whiskies, and the staff at the Greville Street venue deserve our thanks for doing a great job of getting such a large amount of drams in front of myself and Matt, whose reviews are here.

Sadly, the Benrinnes (36.147) didn't arrive in Greville Street, and the Highland Park had been drained by the time I got to the bar on Saturday to do my tastings, so you'll have to rely on Matt's notes for that one.

There's a few red wine finishes here, but fear not - they worked well. Some people don't like finishes or distrust them, but my view is that so long as the whisky's good, I'm happy with it. "But Philip", someone says, "what if it was rubbish before the cask change?". Well, more whisky is better than less whisky, so "rescued" casks are fine by me!

There three whiskies that that made me want more than one bottle. The fruity, floral and ginger Bladnoch was simply a delight. The light, sweet notes of apples and acetone in the Strathclyde won me over, and as a contrast we also have the sherried excellence that is the North British - not out first SMWS sherried grain, and hopefully not our last!

There's quite a list of drams I'd like a bottle of: the fruit and ash combination that the Ledaig delivered, the fruit and caramel of the ridiculously named Arran, the citrus and honey of the Linkwood, the tobacco and fruits of the Miltonduff, the honey mango and lime of the Glen Scotia, the fruity and lightly peated Highland Park, the sultanas and smoke of the Caol Ila and the delightfully fully atypical Laphroaig.

It's a big list, and 20 of the drams were ones I would have another dram of - I'm definitely not listing them all here, as that's going to get in the way of enjoying whisky! And we have another couple of lists coming out during this month, so get to the rooms and enjoy these while they last.

Good luck finding your favourites, and I hope you have as much fun with these whiskies as I did...

Oh, and are you thinking of buying the advent calendar, but want to know what's in it? Jon's got you covered. Don't click on that link if you don't want spoilers!