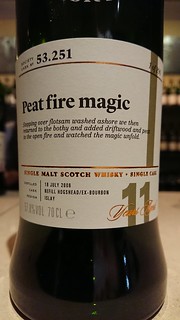 Nothing scores the maximum of five, but there's a whopping seven drams that get a 4.5 and a further five drams that get a four. That's a lot of superb drams, and means that over half the list is excellent.

Let's start with two drams for the whisky geeks - a Dalmore that packs in flavours like it's a car park at a clown convention, and a Laphroiag that's made for demonstrating how water changes a whisky.

Then there's the ones for less involved drinking - the light, sweet Glenlossie, the rich and fully sherried Glenlivet, the elegant and fruit-filled Longmorn, and the sweet and spritely Glen Moray.

Finally, there's my pick of the evening - the delightful Caol Ila, which is just a superb example of Islay magic.

And now we look at those that scored four. Don't overlook the wonderful Aberlour, the cracking Glendronach, the flavour-packed Tormore, the masses of fruit in the Cragganmore or the sweet and peaty Bowmore.

It's rare to have a list that has such consistent excellence - get to the Society and taste them before they're gone!