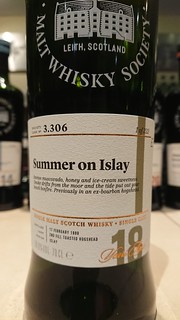 The February outturn is somewhat of a belter... A great selection of drams which is reflected in the great scores - a 5, four 4.5s, and three 4s!

The highest score goes to the remarkable and memorable joy that was the Bowmore. Its combination of fruits, smoke and honeycomb is fantastic. I initially vacillated on the score, and chose to play it safe with a 4.5 - but over the twenty minutes that followed I found the memory of the dram haunted me, and that alone merits the increase to a 5.

The Cameronbridge demonstrates both why it's a great base for blends, but also why you should investigate further. It's sweet and light yet avoids being simple or uninteresting. A dram not to be missed. The Mortlach gets a 4.5 for a different reason - its toasted oak cask delivers an incredible combination of fruits, yet doesn't slack on the darker flavours of oak, caramel and dark chocolate. The habit of cask finishing by the SMWS has drawn some criticism in some quarters, but this dram this showcases just how good it can be! The Dailuaine has magnificent balance and plenty of flavour. It's sure to sell out fast! And finally, the Laphroaig is a subtle, TCP-free dram that has delicacy yet a big presence - a Laphroaig for those who don't like Laphroaig! If that's not worth a high score of 4.5, I don't know what is...

The Glenrothes was a solid, full-flavoured sherried dram that I can barely believe was from a refill cask - the original fill must have lasted mere minutes! Also scoring a very good 4 is the Longmorn, which takes its title ("Mature way beyond its years") seriously. That first fill sherry cask that did a marvellous job in a mere 8 years. And if you want a dram that's not sherried, Aultmore provides sweet, fruity notes that also gained a creditable score of 4.

Scores aren't everything, and I'd like to point out that you shouldn't overlook the rather tasty Craigellachie, nor the curiously citric Glengoyne. Both are worthy of attention, and I'll probably be drinking them again - just to check my notes are accurate, you understand!

As ever, I write my tasting notes primarily for myself - I've added a little explanation of a couple of scores, but that's all. The very best thing you can do is get yourself to a Society venue and try them yourself - but if you can't do that, then I hope these notes help.