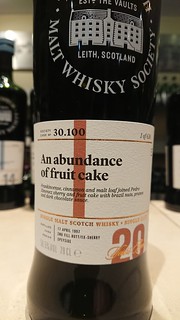 The nose has raisins, cinnamon and malt loaf. The mouthfeel is decent but has no cling. The body has madeira cake, raisins and an undeniable sherry note. The finish is raisins and sultanas, with a little sherry.

Water brings out thick whorling that settles quickly into brief mottling. The nose gains more malt loaf and loses the cinnamon. The body gains toffee and more fruit notes - sultanas, raisins, plums. The sherry remains, and has become somewhat more expansive - but not louder in the mix. The finish gains more sultanas and some caramel.

A superb example of how active a refill cask can be - I hate to imagine what the first fill did! This is a great fireside dram.