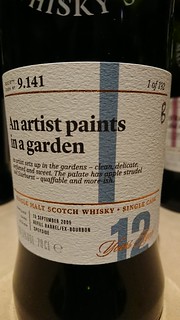 There are three drams that score 4.5, and four that score 4. What's more, there's two sherried drams and three peated ones, plus an oily and coastal. Not a bad spread of whiskies!

The highlights were the floral, fruity Glen Grant, the honeycomb, bread and ginger of the Strathclyde, and the ash and lemon of the Ledaig. I'm looking forward to drinking all of those again (and again, and again)!

Also worth a try are the deep, fruity, bready Glentauchers and the sweet, oily, lemony and moreish Bunnahabhain, the lemon and oak of the Tormore and the crisp smoke and lemon sherbet of the Caol Ila.

(I didn't read the outturn list until after I'd reviewed the whiskies, so had no idea the Bunnahabhain was exclusive to offers - and paired with the Glentauchers! What a combination!)

There are quite a few spicy drams on the list - and yet I feel I should note that the wonderfully named "Charge of the spice brigade" still scored a 3.5 and has a great set of accompanying flavours that help temper the spice. The Cragganmore and the Laphroaig were also pretty decent drams that I think are worth investigating. And sherry fans will adore the extremes of the Ben Nevis!

Sadly the Ardmore (66.112) and the Balblair (70.23) are arriving late - so there will be one more update. I've enabled versioning on this page - you can see the initial summary from the preview here.